Here, continuing our Tutored Tasting series with the Caterer and Hotelkeeper, we gave the task of testing and tasting the more unusual varieties of potatoes to three chefs: Andrew Lassetter, Gary Devereaux and Oliver Gladwin.

The potatoes were provided by MG & Sons of New Covent Garden Market and the chefs discussed their favourite flavour combinations and shared ideas for dishes.

Usage: This variety fries well and the strong blue internal patterns created a basis for some creative sautéed potatoes or crisps.

Notes: Shetland Black was added to the National Collection in 1923, but probably dates from Victorian times when there was a great deal of potato breeding using coloured varieties.

Properties: Long and narrow and famously knobbly, often with side growths. The skin is  part pink/part white with yellow flesh and a waxy texture.

Notes: Originally imported in 1850 and kept solely by British enthusiasts for decades, because of its very fine flavour.

Tip: Try cooking them whole, and when cool, thinly slice with a mix of spring onions, mayonnaise, salt and pepper. 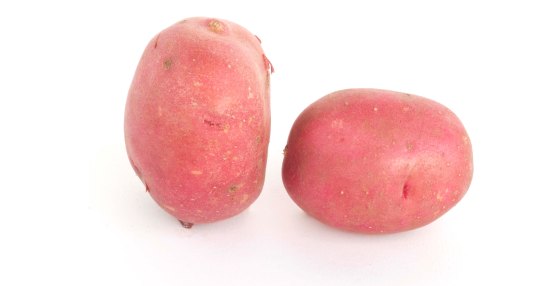 Notes: The Red King Edward is a rare red version of Kind Edward which first appeared as “Fellside Hero” in Northumberland.

Properties: The skin and flesh are both a strong, deep blue which remains when cooked.

Usage: Not actually a salad potato, but makes great novelty chips, crisps and mash. Best to steam, as it can disintegrate.

Notes: Nutrionists have stated that the antioxidants provide many health benefits, which can help towards preventing certain diseases.

Properties: An attractive, bold, yellow baking variety which stands out visually from other varieties.

Usage: Roast, boil or chip. Particularly good for mashing as it holds butter and cream well.

Properties: This vibrant red tuber has pale-yellow, floury flesh with a wonderful flavour.

Usage: Floury mash, perfect bake or roast with the skins on.

Notes: The Red Duke of York variety is said to have first been found in a Dutch crop of the Duke of York in 1942.

What the chefs said

"I made Wasabi mash with the Red Duke of York and it was so floury it almost fell apart. It really sucks up flavour and the potato adds creaminess to the intense flavour of the Wasabi ad the colour is lovely and yellow."

"The Yukon Gold are very durable, it would be fantastic cooked in goose fat. I made a salad of Shetland Black, red Duke of York and Salad Blue with a lemon goats’ cheese mousse and the flavours all worked really well together."

Oliver cooked a potato medley with Pink Fir, Salad Blue and Yukon Gold, blanched separately and rendered down in pork fat from home-cured bacon. He then put them through the oven with thyme, smoked garlic, sherry vinaigrette and whole cobnuts for an autumnal feel.