In this month's report, we're going to take a look at celosia…a quirky flower with a wonderful velvety texture. 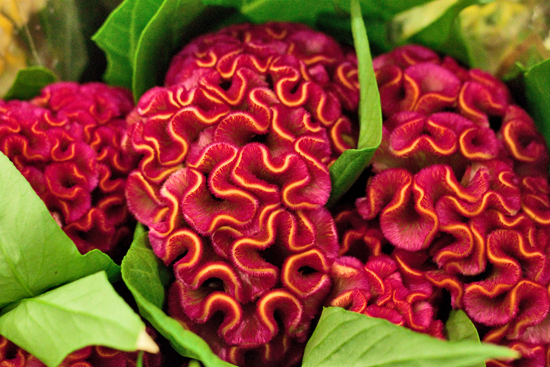 Celosia get its name from the Greek word 'keleos' which means 'burning', a reference to the flame-like shape of the flower heads of some of the varieties.

It is native to tropical and sub-tropical America, Africa and Asia.

Generally available as a cut flower from April to November with stem lengths of 70-75cm, most of the celosia at the Market comes from Holland.

However, during the summer months, a variety of Celosia argentea var. Cristata with big flower heads and 1m tall stems is available from Italy.

We'll take a look at these two main types of celosia in turn.

Coral-like is how Celosia argentea var. Cristata is often described, due to the shape of its flowers.

And it will come as no surprise to you to discover that Cristata means 'crinkled', as this also aptly describes the shape of the flower heads. This group is sometimes referred to as the crest type of celosia.

There are two distinctive kinds of Cristata. There is the narrow flat form, with wavy fan-like flowers, reminiscent of a cock's comb. Hence, its common name of 'cockscomb'.

And there's also the larger, wider global form which is generally called 'brains', due to the structure of the flower head resembling the folds of the brain. 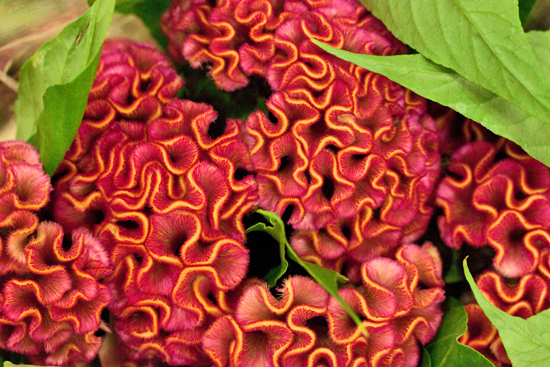 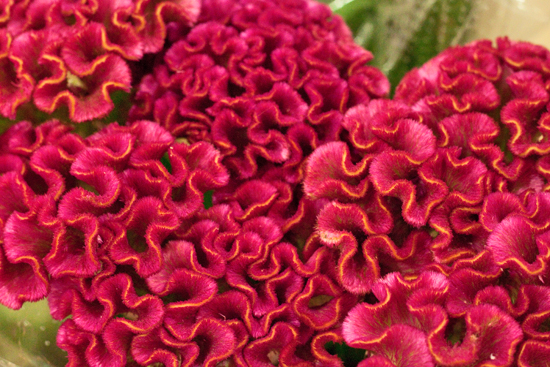 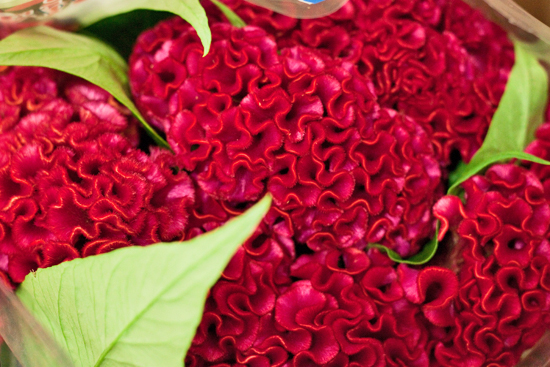 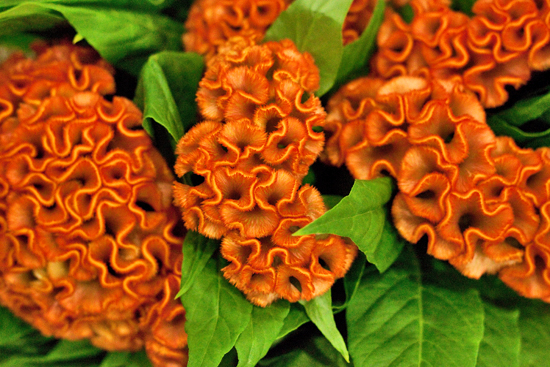 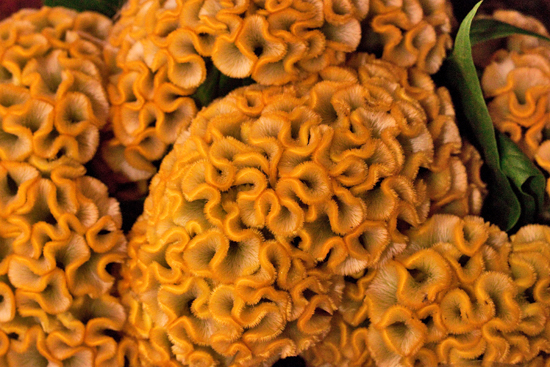 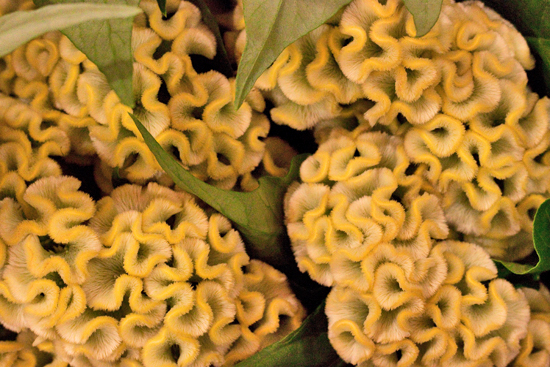 Celosia argentea var. Plumosa has a different kind of flower head. It has pointed, flame-shaped, fluffy blooms which have a soft and feather-like appearance, reminiscent of pampas grass.

This group is sometimes referred to as the plume type of celosia.

Celosia Caracas 'Venezuela Dark', pictured below, is a very popular variety with its deep pink flowers. 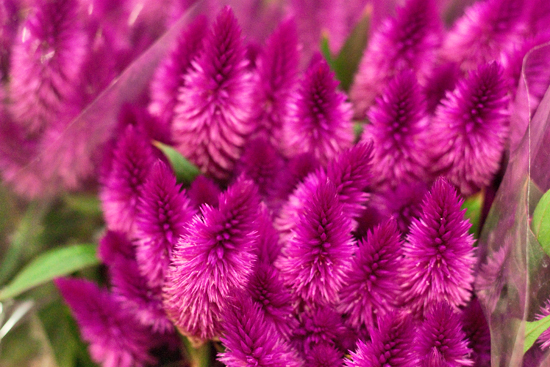 Celosia argentea var. Plumosa is sold in bunches of 5 stems. And the price is around £0.80 per stem.

With regards to conditioning celosia…remove excess foliage, cut the stems at a slant and place them in clean water.

Take care when handling the Cristata variety with its velvety frills, as the flower heads are quite delicate and if manhandled, can break off.

Both Ronny at Bloomfield and Bobby at Alagar say : "Keep celosia in a warm environment…they don’t like the cold. Also be aware that Celosia argentea var. Cristata can bruise easily."

Celosia is very sensitive to Botrytis (grey mould) on the leaves and flowers.

So, keep it in a place where the temperature remains as constant as possible to prevent condensation, and therefore Botrytis. And it's also best to keep it in an area where there is good air circulation.

Celosia provides wonderful textural interest to bouquets and arrangements. And the tall variety from Italy is perfect for pedestal designs.

So, if you'd like to buy some of these striking opulent blooms, why not visit the Market soon to see the different types and wonderful colours available?

And if you have any comments about celosia, it would be lovely to hear from you. Simply type in the boxes below… 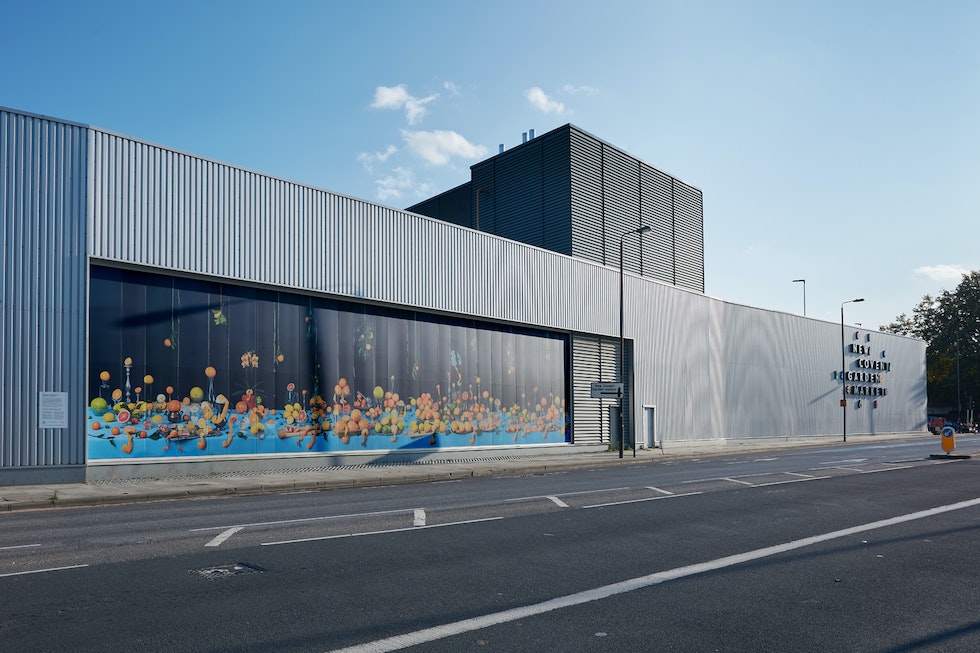 We are seeking proposals from artists for the second edition of Vitrine; a paid commission for a 20m long public art space on Nine Elms Lane.

A chef's guide to avocados 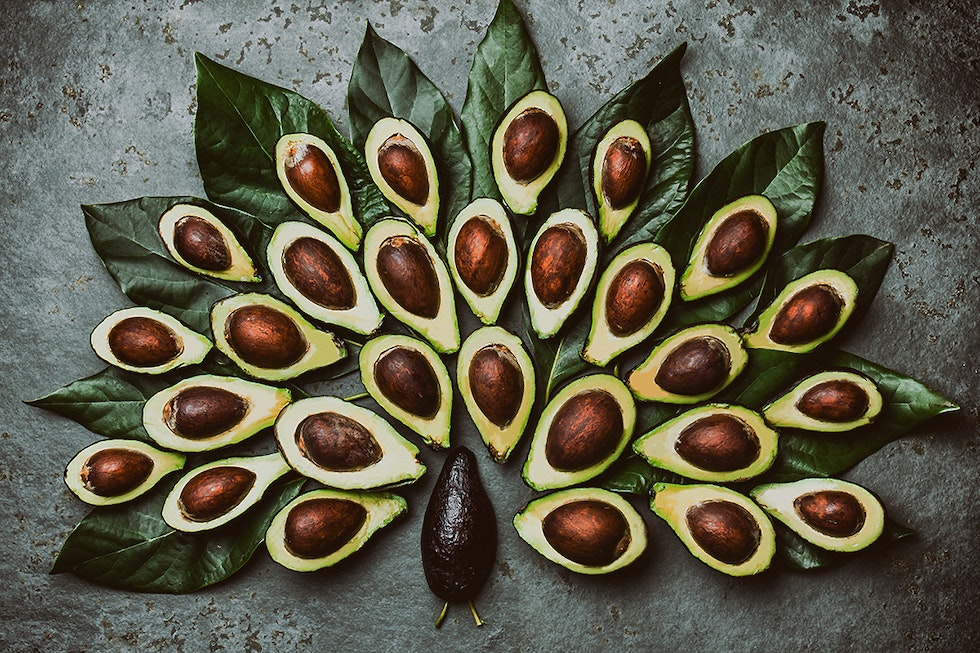 Consumption of avocados has rocketed in the UK - more than doubling in the last five years. 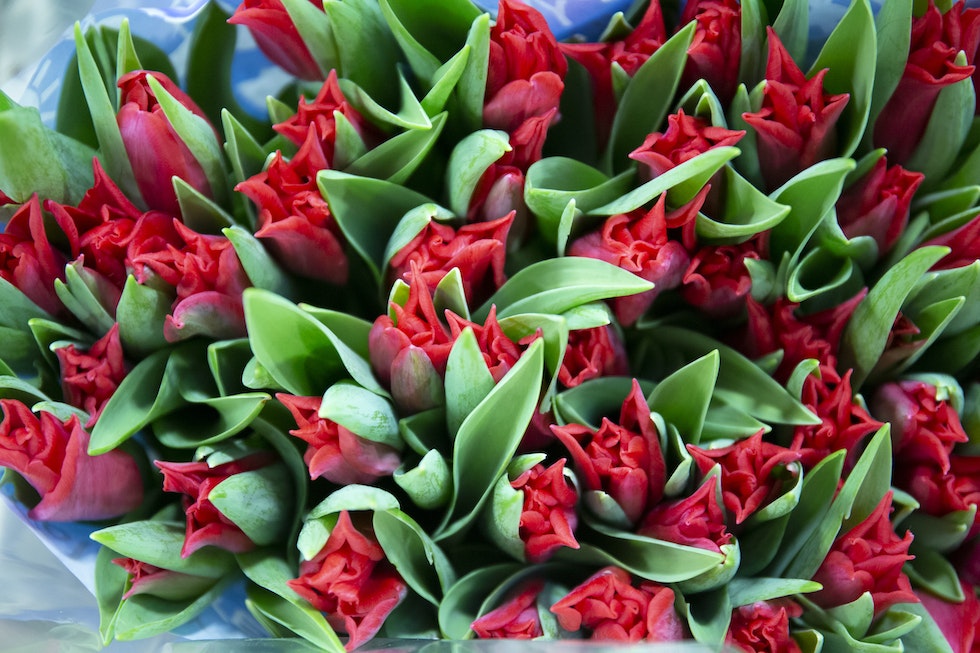