Rewind a decade and the Chinn family was quietly growing spuds in the Wye Valley, a crop they had farmed for four generations.

Now, in just ten short years, they have forged a reputation as one the leading growers of British asparagus - renowned for their innovative growing methods designed to extend the short season of this prized ingredient. 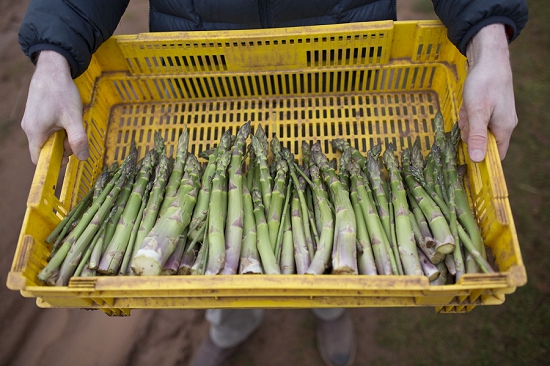 Custom states that the British asparagus season runs from St George's Day on the 23rd April until the 21st of June - just two months.

Yet the earliest Chinn crops hit the Market by Valentine's Day and their autumn harvest is available as late as November.

The family farms 3,500 acres, of which a third is dedicated to asparagus production under the 'Wye Valley' brand.

At peak season, they employ 1,000 workers to assist their 25 full time staff to pick and pack the harvest. 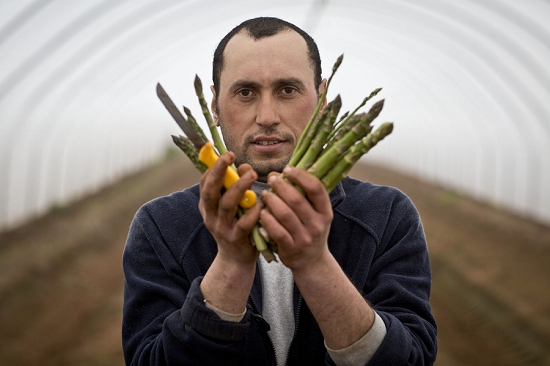 "We grow it all and pack it all - that makes us relatively unique," says Chris Chinn, pictured below. 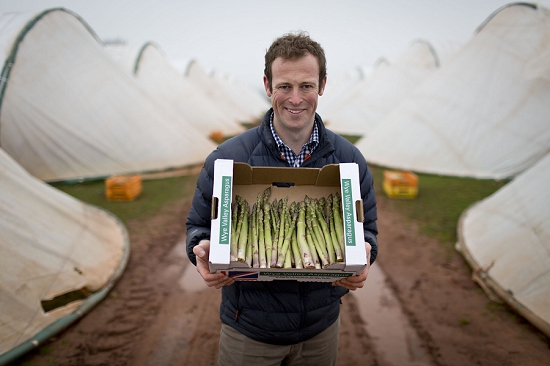 Asparagus is a plant that grows fast - as much as ten inches in 24 hours. This rapid growth is driven entirely by temperature. "They are like little thermometers," explains Chris. 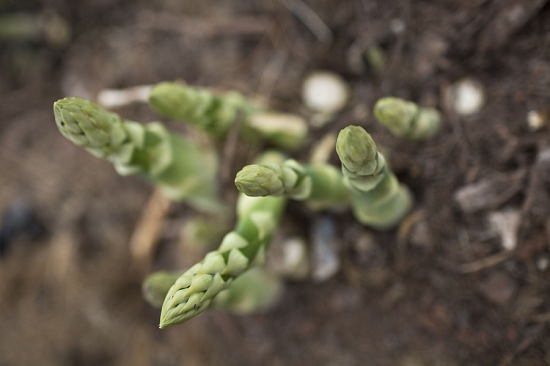 To produce an early crop, the Chinns select Mediterranean varieties that grow at lower temperatures than those from Northern Europe. These plants are then cultivated in polytunnels, where the sunlight is converted into extra heat to accelerate growth. 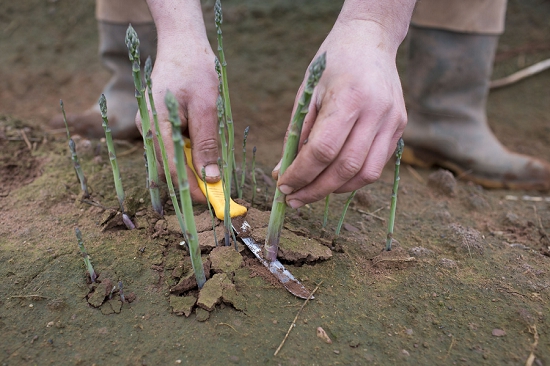 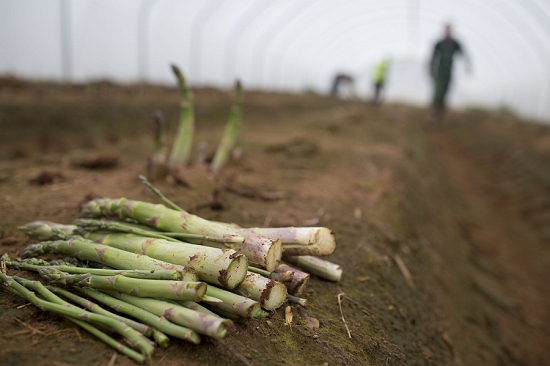 For the main crop, plastic cloches are used in the open fields to bring the harvest forward. 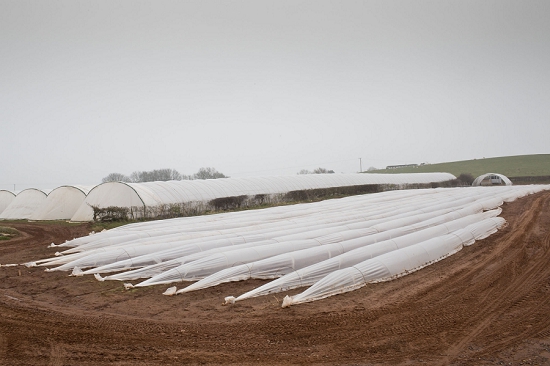 The Chinn's autumn asparagus is grown with a "reverse season" technique, where the plant is allowed to produce its fern early in the season before it's cut back to allow for a later growth spurt.

"That's brand new - it's only us that does that," says Chris. Amazingly, he says he once even picked a few spears on a warm Christmas Day.

In addition to green asparagus varieties, Cobrey Farm also cultivates more tender purple varieties, ideal raw in salads, and are the only British producers to offer white asparagus, which is grown entirely in soil to exclude the light. 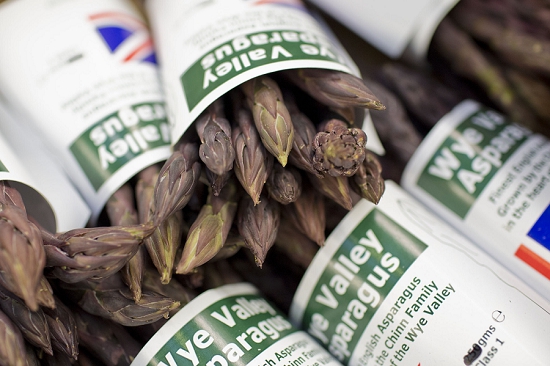 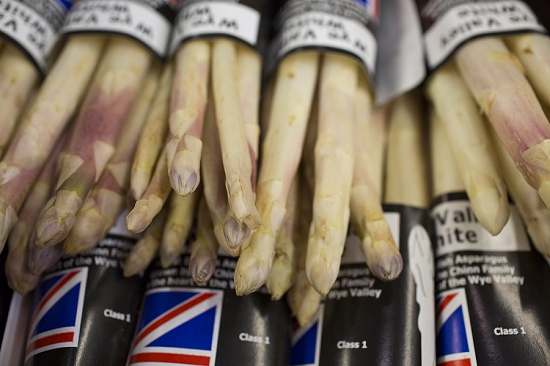 Their asparagus is graded into fat, medium and thin spears. Asparagus tips are proving an increasingly popular product. The largest jumbo spears are also garnering attention for their excellent flavour. These are typically split down the middle and grilled. 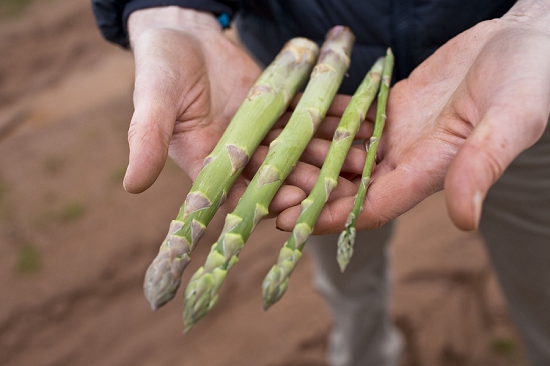 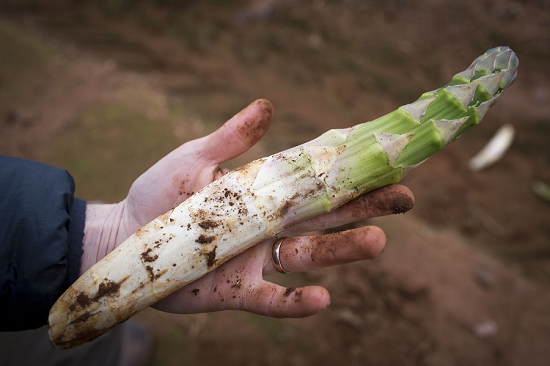 Demand for asparagus is booming in Britain. Ten years ago, just 3-4% of the population bought the ingredient. Now the figure stands at 15%.

"An affordable luxury is the point we're at now," says Chris, "but if we go back 50 years it was a luxury product. You wouldn't have seen it on dinner plates across the country - it was the preserve of the wealthy."

This growth in demand is an opportunity for his business, especially as the farm can supply product earlier and later in the season when consumers would usually rely on imports from countries such as Mexico and Peru.

"People eat asparagus all year round and we're not going to change that," says Chris. "People are used to it and love it."

From an environmental perspective, buying British makes a lot of sense. Imports are flown in airfreight, with every kilo of asparagus responsible for ten kilos of CO2 emissions.

Water is another environmental consideration. Asparagus is a thirsty crop, and in hot arid growing areas in Peru and Mexico this scarce commodity is exported to the farms for irrigation.

Moreover, the product takes longer to travel to the consumer. Asparagus harvested that morning in the Wye Valley is hydro cooled within one hour to maintain sugar levels and then delivered to the Market that night. "It's 24 hours from us cutting to a chef cooking it," says Chris.

In addition to asparagus, the Chinn family also produces forced rhubarb earlier in the season, from March to May, and blueberries from mid to early autumn, June to October.

"They sit together quite well in terms of spreading the load on the pack house," Chris explains.

In contrast to the Yorkshire growers (see our Forced Rhubarb Product Profile from earlier this year) they force the crop outdoors under black plastic.

Without the extra heat of the forcing sheds, their forced rhubarb crop arrives to Market a few months later. "We tend to fill that gap after the Yorkshire boys have finished," says Chris.

A thousand acres of the farm is also dedicated to combinable crops such as wheat, barley and rape, with another 500 down for potatoes that end up in packets of Tyrrell's crisps. They also produce sparkling wine under the Castlebrook brand.

But it's asparagus that gives the family the greatest satisfaction, as it is a premium crop that provides a direct link to and feedback from the consumer.

Chris points out that asparagus is an unusual crop in that it's a national treasure in whatever country it is grown. "We are nothing compared to the Germans and their love of asparagus."

White asparagus has always been more popular over the Channel. "Funnily enough, in Germany and Holland they are introducing green asparagus - it's the new trend."