You can see it in the trees, you can smell it in the breeze, June is bustin' out all over.

Thanks to the ludicrously warm weather, it feels like it’s been busty June for weeks now.

I’ve been at Chelsea Flower Show, compering designer floristry demonstrations in the Talking Flowers theatre. Liz Anderson, New Covent Garden's PR, shared the duties. (Standing room only; half the audience first-time visitors to the show. Excellent news for the future of gardening and floristry both.)

Now, Chelsea show gardens are normally a riot of iris. Not this year.

The heatwave accelerated their flowering - leaving many garden designers with a last-minute gap in their planting plans.

Allium to the rescue! Lovely fluffy things, though they do tend to whiff of onion.

But if you’ve got an event where no-one’s likely to fondle them, and the room’s well-ventilated, you could create something rather lovely - like this modern spiral by Andy Devonport of Wild About. 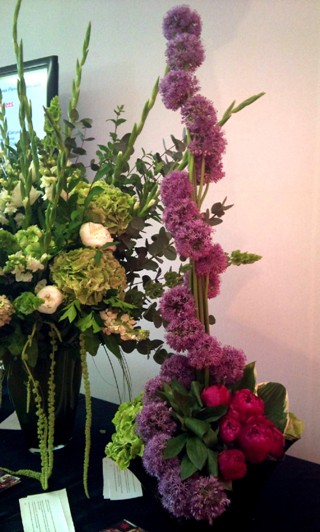 Mathew Dickinson made garlands of the incomparable wine-purple "Extase". And boy, is it ecstasy!

If you’ve never smelled this rose, seek it out; it has the most intense perfume you’ll ever get your nose near. If the "ooohs" of the Chelsea audience are any guide, it should fly out of your shop at any price. 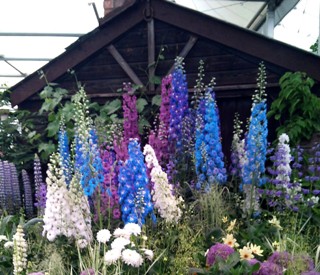 Few other flowers radiate such a pure sky blue. And very useful for corporate floristry – company logos are often blue, and firms want to have flowers in their company colours.

So if you’re planning on expanding your corporate business, mug up on delphinium varieties!

Rebel Rebel, who buy all their flowers from New Covent Garden Market, told me that the Pope Himself has corporate colours. Who knew? Gold and white, since you ask.

And celebrity florist Simon Lycett, another Market regular, will be arranging hundreds of glossy red anthuriums for Manchester United’s next official function.

UK Horticulture's Chelsea stand was a triumph of quality and variety in British growing – and rocked the current trend of mixing fruit, veg and flowers to great effect. (Kudos to designer Penny Riley.)

Many are from growers who send to New Covent Garden; such as this gorgeous new frilly lisianthus, fresh from Geater & Son. 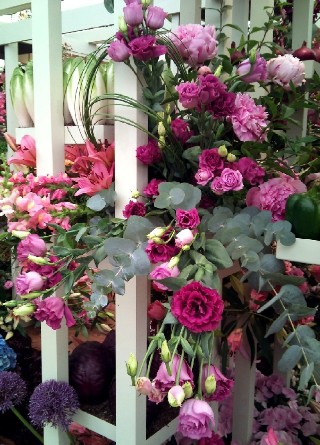 Judith Blacklock mixed it up in her demo too. English sweet peas were wrapped in beanpods; vases were tiled with red chillis; strawberries mingled in a pot-et-fleur windowbox. 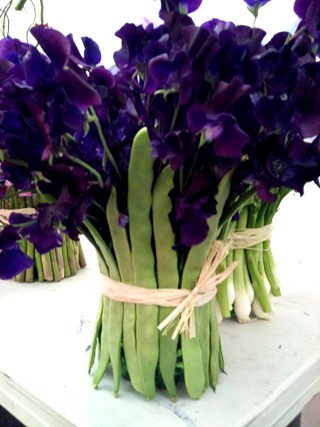 Mathew Dickinson studded his yellow peony wreath with lemon halves. Next time you’re in the flower market, swing over to the fruit & veg block to see what tickles your fancy.

Diarmuid Gavin's garden was 99% green-on-green; ditto Ann-Marie Powell's. Wild About is even doing an all-foliage wedding soon. Yes, no flowers in the bouquet!

New Covent Garden's Barry Porter gave visitors the lowdown on greenery in the Talking Flowers theatre. And he really knows his leaves, twigs, branches and fronds.

If you missed it, catch the repeat 3am to 10am weekdays at Vauxhall! Make foliage the star of your designs, not the supporting cast. What about trying a little plaiting, like this from the Thai Nong Nooch stand? 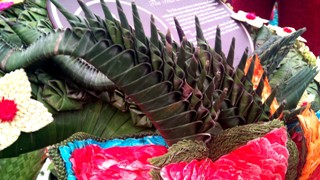 Further competitions are happening at Tatton Park, in July. Keep up with new varieties, and trends in design styles, by visiting the Market and attending its regular florist events. I’ll see you there!

What are you looking forward to this month? Leave us your thoughts and comments below.